Storm-rattled areas of the southern United States from Texas, Louisiana and Arkansas to Mississippi, Alabama, Tennessee and Kentucky will face more potentially damaging and dangerous weather conditions into Thursday night as the second and more powerful storm of the week threatens to bring violent thunderstorms and flooding rain.

The first storm of the week brought torrential rain and localized flooding from part of the upper Texas coast to Louisiana and part of Mississippi into Tuesday night.

It was just a week ago that portions of the lower Mississippi and Tennessee valleys were hit with destructive severe weather and tornadoes. On St. Patrick's Day, March 17, 56 reports of tornadoes, 27 incidents of large hail and 79 episodes of damaging wind gusts were tallied by the National Weather Service's Storm Prediction Center.

This is also part of the same zone that was hit with record cold conditions and heavy amounts of snow and ice during February. The severe cold caused major damage to infrastructure, and some communities are still struggling to recover.

"An outbreak of severe weather is likely that includes everything from the threat of large hail and damaging straight-line wind gusts to isolated tornadoes with the main part of the event from Thursday to Thursday night," AccWeather chief on-air meteorologist Bernie Rayno said. 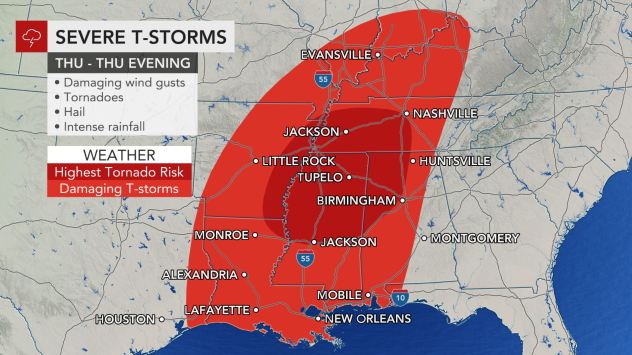 The storm set to trigger the outbreak will shift east out of the southern Rockies, where heavy snow was falling on Wednesday. Thunderstorms are forecast to ignite over parts of the southern Plains by late Wednesday.

"The first storms are expected to erupt in parts of eastern Texas late Wednesday and progress eastward and northward Wednesday night," Rayno stated. "It appears the main threats from these first storms during the outbreak would be large hail and damaging wind gusts."

Some of the hail could reach the size of golf balls or larger into Wednesday night, and wind gusts may top 60 mph.

Even though there is still the potential for cloud cover and wet soil conditions to limit the intensity of some of the storms over the lower Mississippi and Tennessee valleys on Thursday, that safety net may not be enough to prevent a significant number of violent thunderstorms. 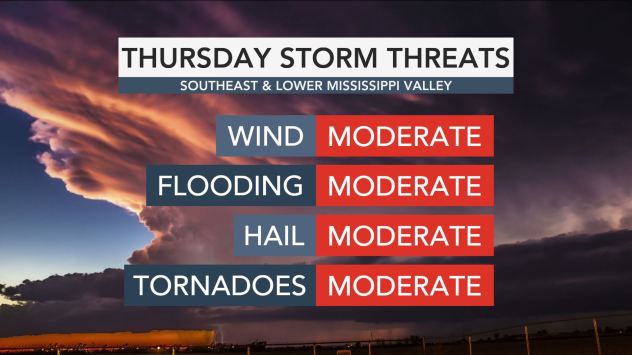 Gulf of Mexico waters have warmed significantly in the past few weeks, and the strengthening sun this time of the year may be enough to burn through the clouds and help warm the lower part of the atmosphere. Water temperatures along the upper part of the Gulf of Mexico were in the 60s to lower 70s F as of midweek.

It is the warm, moist air near the ground that helps to fuel thunderstorms, and when strong winds are present aloft, particularly when winds increase in speed and change direction at higher levels of the atmosphere, thunderstorms can become intense, rotate and produce tornadoes.

These conditions are expected to be present in the setup Thursday, especially across the northern parts of Mississippi and Alabama into eastern Arkansas, the northeastern corner of Louisiana and western and central Tennessee. At least 50 million Americans will be at risk for severe weather dangers. 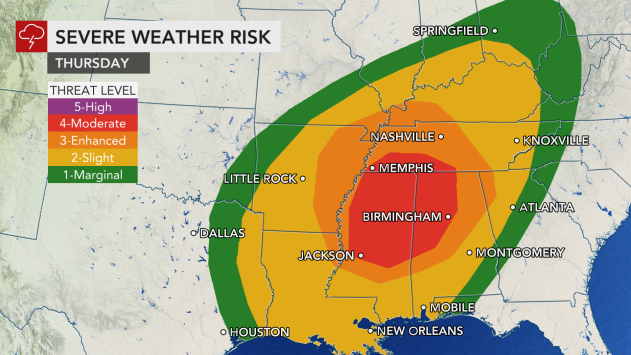 Alabama was dealt some of the most destructive severe weather last week. An EF2 tornado touched down in Chilton County on Wednesday, spawning 130-mph winds. An EF1 tornado packing 110-mph winds struck Moundville, Ala., causing severe damage to buildings and ripping roofs off homes.

AccuWeather meteorologists believe that some risk of severe thunderstorms and perhaps an isolated tornado exists as far north as the Ohio Valley, but the greatest threat of tornadoes will be farther south from Tennessee to near Interstate 20 in Mississippi and Alabama. Storms that cruise through the Ohio Valley are expected to unleash the threat of damaging wind gusts.

"Some of the storms may be severe as early as the daylight morning hours in the Mississippi Valley, but the prime time for severe weather and tornadoes seems to be during the afternoon and early evening hours on Thursday," Rayno said.

There is still some risk of storms capable of producing tornadoes after dark, but this should be more of an exception now thanks to the shift of daylight hours associated with daylight saving time now in effect. Late-night tornadoes appear to be unlikely at this point. 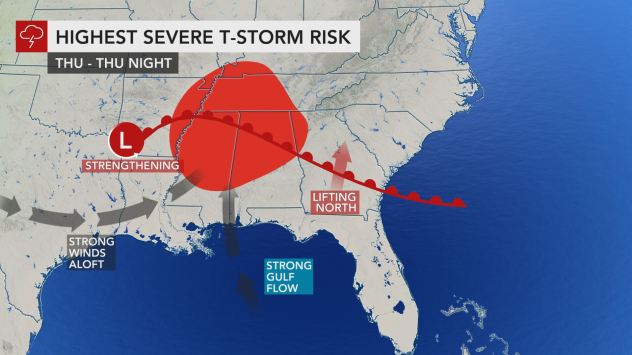 Nighttime tornadoes are especially dangerous as many people may not know a storm is heading to their neighborhood unless closely monitoring severe weather watches and warnings.

Any thunderstorm in the alert zone can easily produce wind gusts between 40 and 60 mph. At this force, there is the risk of property damage, falling trees and sporadic power outages.

In addition to the likelihood of violent thunderstorms, there remains a significant risk of flooding over the same general area of the nation.

As the first storm system encountered Gulf of Mexico moisture into Tuesday night, gusty and locally drenching thunderstorms led to incidents of flash and urban flooding along the northern part of the Gulf coast. 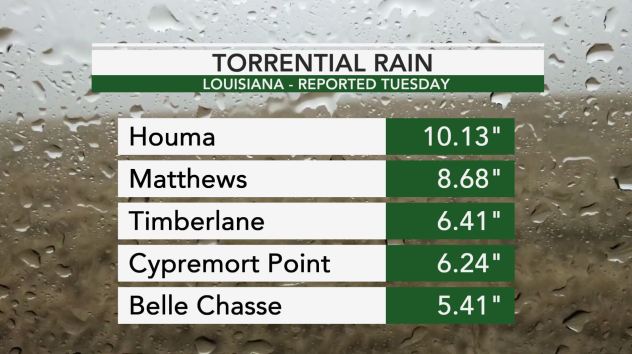 This graphic depicts the amount of rain that fell on Louisiana on Tuesday. Graphic by AccuWeather

National Weather Service hydrological data indicated that the Contraband Bayou near Lake Charles, La., rose rapidly to major flood stage on Tuesday morning in response to heavy rainfall. Flood stage for the site is 8 feet, but the level had reached 12 feet. Major flooding begins at 10 feet. More such incidents are anticipated in the coming days from the Mississippi River Delta region through the Tennessee Valley.

From noon Tuesday to 8 a.m. Wednesday, more than 6 inches of rain fell on New Orleans and triggered flooding in the city.

"In the Interstate 10, 20 and 40 corridors in the Mississippi Delta and lower Mississippi Valley region, a general 4-8 inches of rain is anticipated during the middle days of this week, with the bulk of that rain expected to fall from Wednesday to Thursday," AccuWeather senior meteorologist Brett Anderson said. 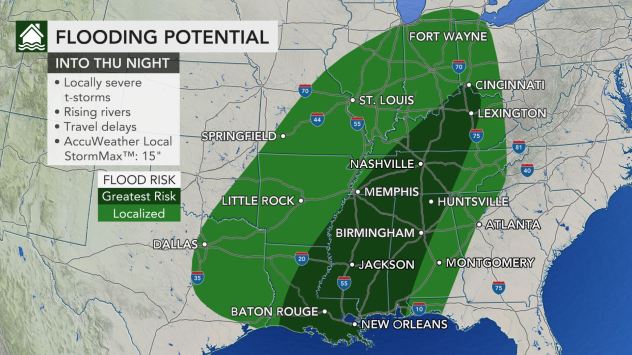 "Some of the rain from Tuesday to early Wednesday fell on areas that were hit with flooding downpours during last week's severe thunderstorms," Rayno said.

Rainfall from last week alone was anywhere from two to five times that of average. The bulk of the rain last week fell in two days -- on March 16 and 17.

For example, Meridian, Miss., received 4.42 inches of rain on March 16 and 17, compared to a normal of 1.21 inches of rain for the third week of the month. Meridian is within the zone of anticipated heaviest rainfall at midweek.

Birmingham and Huntsville, Ala., are forecast to be within the zone of the potentially excessive rainfall this week, and both locations received about 4.5 inches of rain on March 16 and 17.