The fourth storm to hit Vietnam in a month, Molave damaged some 56,000 homes and left millions without electricity.

Vietnam has deployed heavy machinery and hundreds of soldiers to search for survivors buried under landslides triggered by torrential rains from Typhoon Molave, one of the strongest typhoons to hit in the region in decades.

The landslides, which hit remote areas in the central province of Quang Nam a day earlier, killed 13 people, according to a government statement. Rescue efforts were hampered by bad weather at the tail end of the storm and 40 remain missing, it added.

“We can forecast the storm path or the amount of rain, but can’t predict when landslides happen,” Deputy Prime Minister Trinh Dinh Dung said in a statement.

“The road is covered under deep mud and heavy rains are still lashing the area, but rescue work has to be carried out quickly.”

Since early October, Vietnam has been battered by storms, heavy rains and floods which have left at least 130 dead. More than one million people were already “in severe danger and in need of relief” before the latest typhoon hit, the International Federation of the Red Cross (IFRC) said in a statement on Wednesday. 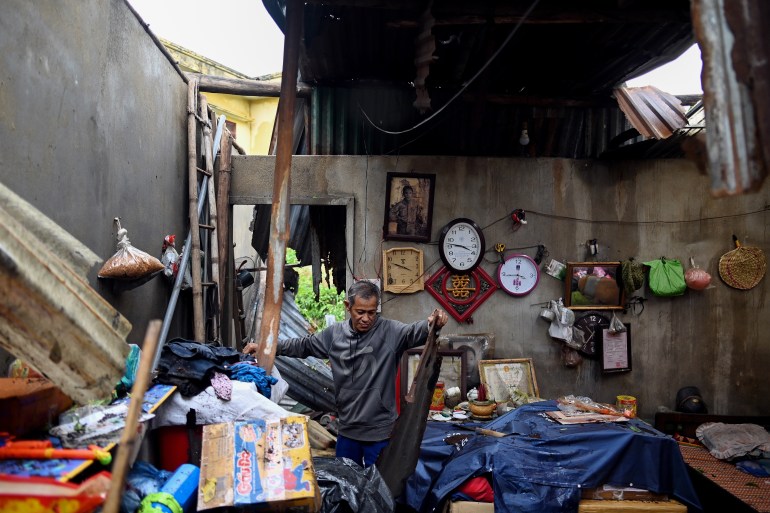 A man clears debris from inside his house after it was damaged in central Vietnam’s Quang Ngai province on October 28, 2020, following the aftermath of Typhoon Molave [Manan Vatsyayana/ AFP]The fourth big storm to hit Vietnam within a month, Typhoon Molave ripped off roofs, uprooted trees and left millions without electricity in the central region, according to local media. More than 56,000 homes were damaged.

Twenty-six fishermen also remain missing after their boats sank when trying to return to port on Tuesday and two navy vessels had been mobilised to find them.

“The people of Vietnam are tough, yet this is among the worst destruction ever seen in many areas,” said Nguyen Thi Xuan Thu, president of the Vietnam Red Cross Society. “The relentless storms and flooding are taking a devastating human toll, further destroying livelihoods and isolating millions of people.”

She added: “All our hard work in containing the social and economic fallout of COVID-19 is being undone by these massive storms hitting us one after the other.”

The IFRC also said that at least 150,000 people were at immediate risk of food shortages and hunger after flood waters destroyed thousands of hectares of crops and killed more than two million cattle and poultry.

Molave weakened to a tropical depression after making landfall on Wednesday and is expected to reach Laos later on Thursday.

Heavy rain of up to 700 millimetres (27.5 inches) will continue in parts of central Vietnam until Saturday, Vietnam’s weather agency said.